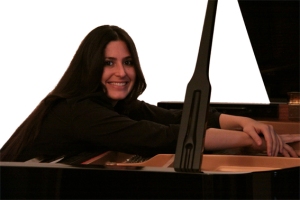 Pianist, Composer and Singer, Italo-American, Delilah Gutman was born in Madrid, 1978. She lives and works in Milan and Rimini where, in 2007, she founded the Cultural Association D.G.M.A. for the research and production of musical and multi-media events such as “Silenzio Musica”, “DoNna” and “Kol bpm.”

She has attended masterclasses with Gyorgy Ligeti, Gabriele Bianchi, Salvatore Sciarrino, and Luca Francesconi. The Fondazione Dragoni (Milan) awarded her a scholarship to study under Luca Francesconi.

As a pianist and singer, Delilah Gutman is active both as a soloist in recitals and in chamber concerts in Italy and abroad.

As a composer, she has to date over one hundred premières in Italy and abroad.

As a teacher, she is constantly researching new teaching methods and putting them into practice with her students. Constant is her commitment to write for the youth in collaboration with different institutions.

Among her many musical installations, readings, art exhibitions, and video art, in particular she has collaborated with the poets Manrico Murzi and Salvatore Ritrovato; writers Haim Baharier, Roberto Piumini and Guido Quarzo; and visual artists Mark Kostabi and Enzo Cucchi.

In recent productions, she composed and interpreted the music for “Acqua”, a contemporary dance show (Titanz Company and Camerata del Titano), coreography by Vittorio Colella, which premiered at the Teatro Titano (Republic of San Marino) and selected for Vignale Danza Festival 2011’s (Torino) Italian première; “Kol bpm”(Giardini pensili and D.G.M.A.), a concert for voice, clarinets and live electronics in collaboration with Roberto Paci Dalò, which was previewed in Bologna at Orea Malià for Arte Fiera 2011 and premiered at the Verucchio Festival 2012 directed by Ludovico Einaudi; “La memoria parla un canto” (Camerata del Titano), a musical exploration through the Jewish tradition for voice and violin, with the violinist Raffaello Negri.

She collaborates with the Institut Archives Légales Amedeo Modigliani Paris-Rome, which is also a patron of her musical opera “Jeanne and Dedo”.

In 2012, she was appointed honorary friendship ambassador  by the State of Israel.